Wait! Don’t let this fungus scare you off from reading this! This little guy is a beneficial fungus that holds the title of one of the oldest symbiotic relationships in the plant kingdom! Mycorrhizae are vital to a plants survival, just like humans need food, water and air to survive, plants need water, Phosphorus and Nitrogen to survive, and that’s exactly what the mycorrhizae assist with in each plant.

Now, there are two different types of this fungus found in plants. About 85% of plant families on this planet have what is called Endomycorrhizae. What that means is this particular fungus penetrates the cells of the roots INSIDE instead of just clustering on the outside of the root. That happens by these little tendrils called hyphae. Think of it as the defense on a football team penetrating the line of scrimmage and getting to the quarterback for a sack. Unlike the quarterback who’s just been sacked and gives nothing to the defense, the root of the plant gives back Carbon Dioxide to the mycorrhizae which then converts it into sugars! How do they give back? By photosynthesis! As we know, all plants go through photosynthesis which is the process of capturing sunlight and converting that captured energy to chemical energy and store it, or this case, share it! All of this takes place right in front of us daily, only on a microscopic level! Remember, Endomycorrhizae exists in green, leafy plants. 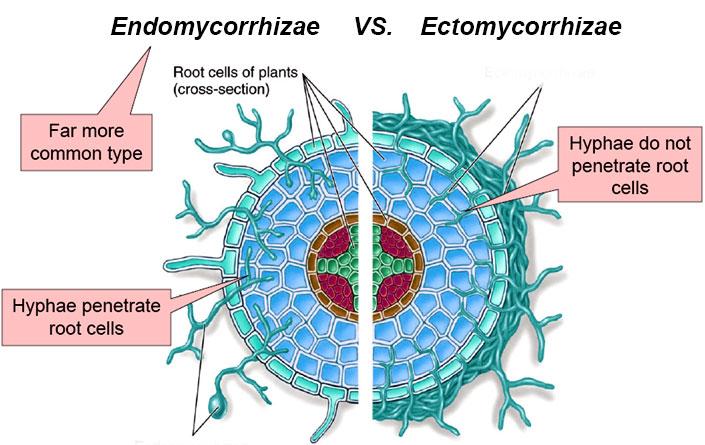 The second type of mycorrhizae is Ectomycorrhizae and that one only appears in about 10% of plant families on this earth. These guys form on the OUTSIDE of the roots, never penetrating the inside. These guys act like safeties, and cornerbacks on a football team, never crossing the line of scrimmage, but rather working in their territory outside the line of scrimmage, just basically floating around in the soil right on the outside of the roots. Ectomycorrhizae occurs in mostly woody plants like trees for example. Pine, Birch, Larch and Oaks are few that come to mind. This fungus performs the same duties as the other one, only this guy doesn’t penetrate the root cells. It still provides mobilization, absorption and translocation of soil nutrients and water to the root.

I bet you’re thinking there’s still 5% remaining, and you’re correct. Did you know there are plant families that are considered non-mycorrhizal? Believe it or not, they already carry their own form of mycorrhizae within their system! How cool is that? The Brassica family is one of these groups, and this includes Broccoli, Cabbage, and Cauliflower, Beets, Brussel Sprouts….have you noticed these are all crops? Also, let’s not ignore the Orchid family! They too carry their own mycorrhizae and they do have a name. This so called

‘non-mycorrhizae’ is Arbuscular mycorrhizae. What this does is the same exact chores as the Endo and Ectos, just a tad differently. When the plants roots extend into the soil, the hyphae of the fungus have just only penetrated the outer layer of the root, not INSIDE the root as in the case of the Endomycorrhizae. So, then those hyphae form what are called Arbuscules and act like an extension of the roots and increase the ability of those particular roots to access even more nutrients like Phosphorus, Nitrogen, and water. It’s like they’re miners tunneling underground and making it possible for even more gold to be found!

This is just the tip of the mycorrhizal underworld. There exists many more levels and classes of mycorrhizae fungi, it would take a few years to cover it all. Go forth and consider using mycorrhizae for your future planting projects!